New Homes in Dutchess County…Near the Walkway Over the Hudson

It’s simple: we love that the Sleight Farm community of new homes is located just 7 miles from Dutchess County gem the Walkway Over the Hudson. Here’s more about this neighbor, which has become one of many reasons why people love living in the Poughkeepsie area:

The Walkway Over the Hudson, opened to the public in 2009, is many things at once: a biking and walking path, a retired historic railway bridge, and a truly unique New York State Historic Park offering some of the most eye-popping scenic views in the entire Northeast. Over a mile long and standing 212 feet above the river, the steel and concrete structure connects the city of Poughkeepsie with the town of Lloyd in Ulster County. 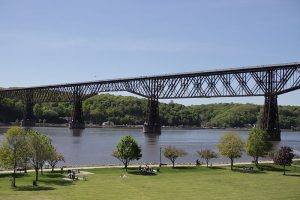 Walkway over the Hudson

The Walkway began its life as the Poughkeepsie-Highland Railway Bridge, and when cargo trains began crossing it in 1889, it was the longest bridge in the world. It carried freight and passenger trains until 1974, when a fire destroyed the tracks. For the next 35 years the span stood, commercially unneeded but structurally unbroken, awaiting its next purpose.

Starting in the late 90s, a combination of non-profits, volunteers, corporate groups, and state agencies worked to repair and remake the bridge, giving it new life as a world-class attraction that blends natural splendor with man-made industrial construction. Open daily from 7am until sunset, the smooth road-like bridge surface is now a one-of-a-kind “park in the sky” for walkers, runners, rollerbladers, and cyclists. It also hosts many special activities and events, including races ranging from 5K runs to marathons.

Each Independence Day, the Walkway is the absolute best place to watch multiple fireworks displays, from the boomers launched in Poughkeepsie, to other, more distant flashes from towns in all directions near and far. Wide open sky-high views with few obstructions bring a thrill rarely felt from “typical” firework-watching.

Also popular are the sky-gazing events held on clear dark nights, when friendly volunteers from the Mid-Hudson Astronomical Association bring their telescopes and their knowledge to help visitors behold the stars and planets in surprising and fascinating detail. On a single night, it’s not unusual to get a clear glimpse of both Jupiter and Mars, as well as a jaw-droppingly detailed look at the surface of the moon.

The grand scale views of the Hudson River and surrounding lands are dramatic and awe-inspiring in all seasons and all types of weather, but our warm summers and crisp autumns are particularly popular with both locals and tourists. With the vast sky above and the mighty river far below, the size and scope of the whole world seems to be evident, and minutes spent gazing up or down the long valley and wide river can become delightfully hypnotic. In fall, the hills and mountains light up with blasts of oranges and reds; in winter the silent white snow and swift-moving river ice combine to showcase both beauty and power.

Today the walkway is an integral part of the Hudson Valley Rail Trail Network, joining the Dutchess County Rail Trail to trails in Ulster County. Over a half a million people visit the park annually. Some are daily joggers, some are weekend regulars, and thousands more are one-timers who will take home envy-inspiring landscape photos and smiling selfies with truly majestic backdrops.

On the west (Highland) side of the Walkway, the Ulster Welcome Center features a patio and amphitheater as well as food vendors. On the eastern (Poughkeepsie) side, the Dutchess Welcome Center has a lovely outdoor patio and services for guests.Visitors with mobility issues can access the walkway via an elevator that rises 21 stories from Upper Landing Park on the Poughkeepsie side.

If you’re coming to visit Sleight Farm and have never been to the Walkway, be sure to fit this into your schedule!